My dad never built us a treehouse, or a playhouse, and we loved it that way. Other kids had a cool swing set, or sandbox, but our backyard had tons of wood, a few hammers, a saw, and a glass jar of nails. That was all we ever needed to build our own fort, and boy did we love building forts. We built open air forts built out of pallets. We built tall forts built out of large wooden spools, that were used by the phone company to carry thick cables. We even built a fort that had a fire pit in the middle. Any parent would probably freak out about that last fort, but the fire pit was dug deeply in the dirt, we had an exhaust system, and we used a rain gutter to build a quick way to send water to the fire pit, if things got out of hand.

Kids came from all over to build with us and I thought we were true fort building masters until the day I first climbed down into a large forty foot pit and saw the fort of my dreams in a place we called.

The Huntington Beach Adventure Playground was located at the bottom of a 40 foot pit near the future spot of the Central Library. It was about three football fields square, maybe a little bigger. It had two ponds, almost no trees, but plenty and I mean plenty of stuff to do, but no one to tell you what or how to do anything. It was a kid’s paradise.

There was a giant mud slide operated with a single garden hose. There were tires to roll and play in. There was a large rope bridge over one of the ponds and several makeshift rafts to navigate the murky pond surface. 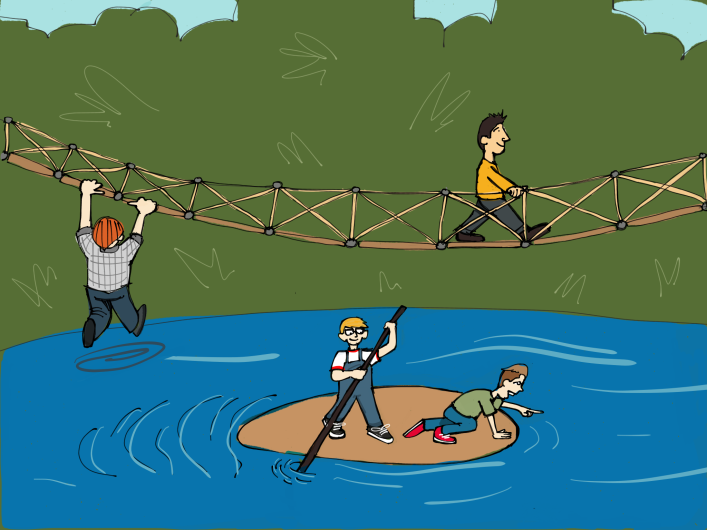 But what really blew my mind were the forts. I’m not exaggerating at all, but there were huge forts in the pit, all built by kids. Some teenagers even built a multi-story fort that was an easy twenty to thirty feet high. My mom saved a copy of a newspaper article from back in the 70s and even in the article they talked about a three story fort. BUILT BY KIDS! There were no guidelines, no spec sheets, no city codes, no rubrics. Just hammers, saws, nails, and wood. It was heaven. 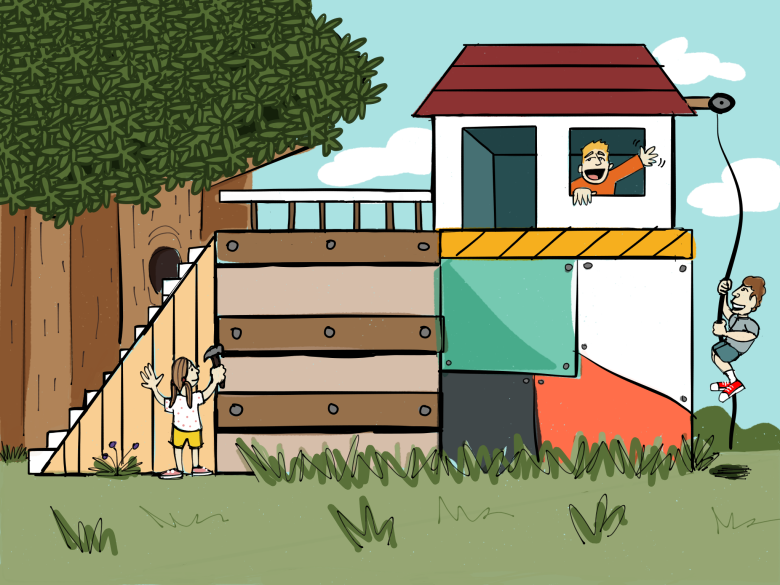 There were only four rules in Adventure Playground:

Now I know what you’re thinking… but what about the liability insurance? I’m sure the Adventure Playground closed due to all of the injuries and lawsuits right? Not even close. See Adventure Playgrounds were SAFER than ordinary playgrounds and parks because the kids KNEW what they were doing was dangerous, so they approached things carefully. Most kids aren’t stupid. They know when you need to be careful. My son did two years of wood shop in middle school. He used a bandsaw to build us two skateboards. Was I nervous knowing that a class of twelve year old boys were using power tools with just one teacher watching over them. Of course, but it was my son’s favorite class. He actually asked me regularly to drop him off to school half an hour EARLY so he could work in the wood shop. How often do students come to my class to read and write thirty minutes before the bell rings for school? How about never.

Sadly, this idea never spread beyond California. There are about 1,000 adventure playgrounds around the world, but only TWO adventure playgrounds in the United States. That’s right- two. The current Huntington Beach Adventure Playground is actually located in its third location. The original pit location has been filled in and now it’s soccer fields and softball fields.

Two factors that stopped their expansion are fear and commitment. Fear of liability and a lack of commitment to resources and space. Instead we build cookie cutter playgrounds that look slightly different, but are built more for parents than kids. Just like a school with colorful furniture might look different, but is it really different? Are the kids in charge of their space? Are the kids allowed to take risks as a part of their classroom experience?

Norwegian researcher Ellen Hansen Sandseter asserts children flourish when given opportunities to make decisions, cooperate, explore and push limits, when given license and material to shape their play spaces as they wish. Children without these opportunities are more likely to become anxious and fearful.

I worry too, but then I remember adventure playground. I remember our backyard forts. I remember going outside to play in places my parents couldn’t see and coming home only when it got too dark to play. What can this look like in the classroom? Maybe it can look like this:

Last summer someone pointed me in the direction of The Art Assignment YouTube channel. It’s an AMAZING project. The Art Assignment is a PBS series hosted by Sarah Green a former art museum curator where she highlights a particular artist and then the artist gives the audience an “assignment” to complete. You can post your completed assignment to various social media using the hashtag #theartassignment and they will host them on their Tumblr which is super cool.

I searched through the past episodes looking for one that would work with my English classes. Then I found it: Fake Flyers. When my students first started blogging we created promotional flyers for their blogs and posted them all over school. 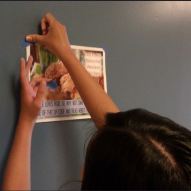 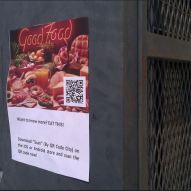 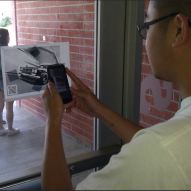 But now my students could learn from and interact with a working artist. They could shake up their world by dropping something unexpected into their community. They could extend their reach beyond our school. The could do something risky, something adventurous, something new.

Risky you say? Sure. I had no clue where they would put their flyers, or what they would put on them. But I wanted them to build something of their own and have them place it in where they wanted. I wanted to show them that they are not mere observers, readers, viewers to the world around them, but active participants. So we watched the Fake Flyer episode of the Art Assignment with artist Nathaniel Russell. 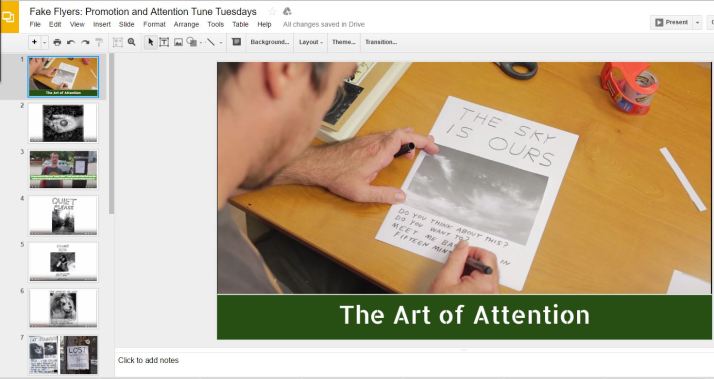 Then I gave out an “Art of Attention: Tune It Up Tuesday Handout” 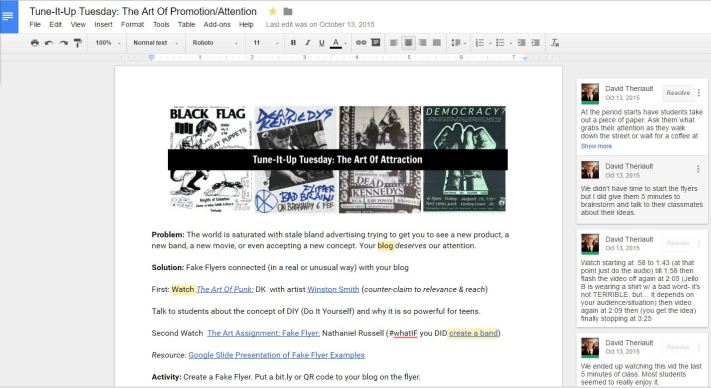 Below are a few of the completed assignments. If you want to see more of my students’ completed fake flyers you can view them on The Art Assignment’s Tumblr. 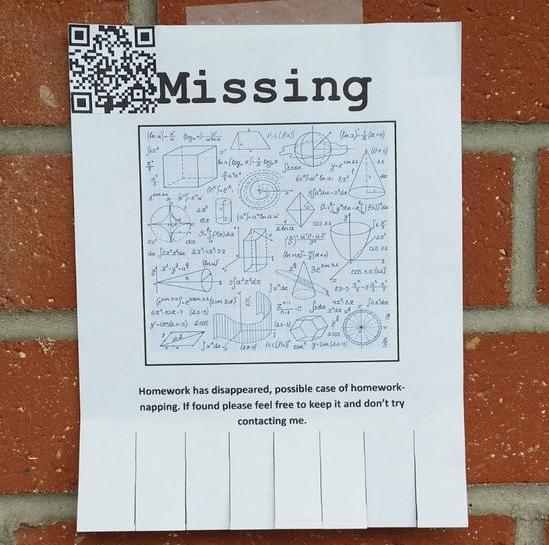 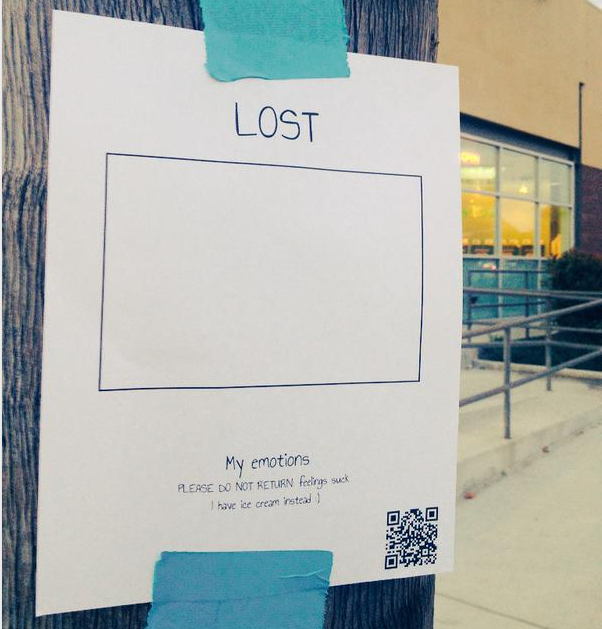 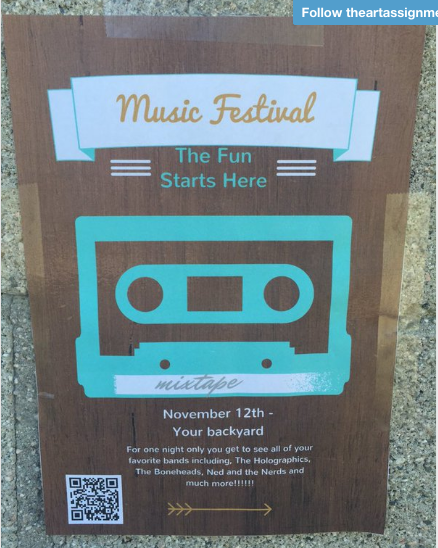 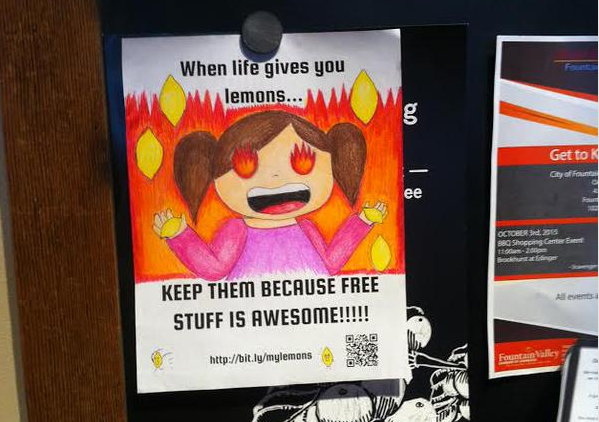 I even got in on the act and created one based on the real coyote warning signs posted in our neighborhood, but I found a more dangerous predator to warn everyone about. I even took some of the language from the coyote warning sign and included it in my fake flyer. 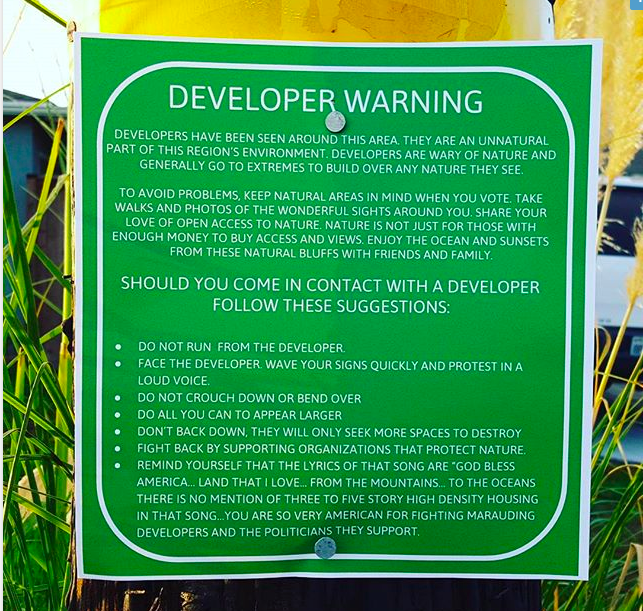 “Within the past two weeks, our English teacher introduced a new kind of assignment never before asked of us. The assignment was basic, yet the meaning behind it was a lot more complex; we simply had to design a fake poster, a piece of art that promoted something that was possible in reality, but not yet conceived in reality, that in some way connected with and “advertised” our blogs. I’m not in any way artistic, so whenever an assignment is based primarily on art, I tend to worry a bit more than I would over a usual assignment. But it turned out alright: I ended up taking somewhat of a different approach with the “fake poster” assignment by asking a question and providing an inspirational quote (both of which have to tie in with the content and overall purpose of my blog) to the passerby who cares to stop and read. In truth, this assignment proved to be one of my favorites, primarily because it taught me how to blend my writing and some form of visual to motivate a person’s thoughts. And that’s what my blog is all about: it’s about getting people to think, getting people to question, getting people to step up from normality, and getting people to go out into the world and change something or change someone for the better…

We each have this voice, and our voices need to be heard by even just one person before we, ourselves, pass on; and the fake poster assignment, a task that motivated me to change something or change someone for the better, is one that left the internal impact to venture out into society and strive to make even the slightest differences before it’s too late. 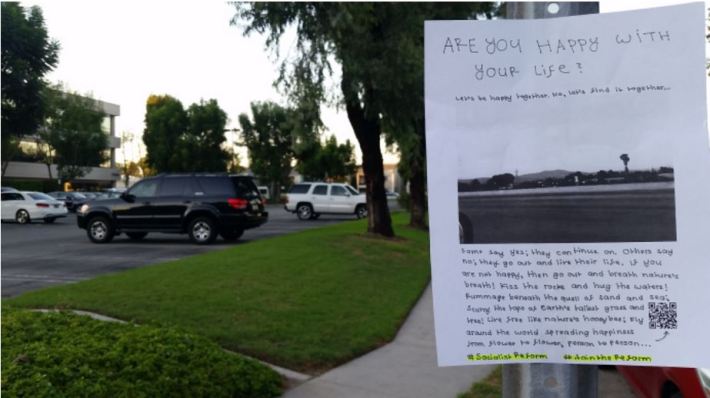 You know, I walked by the street sign I taped my poster to today. It’s still there, the same piece of paper hanging on that same sign. I hope that it stays up there for a while, that many searching eyes will come across my fake poster, because, one day, it too will die: we just don’t know how.”

And here is an excerpt from his reflection on the assignment:

The fake flyer assignment is by far my favorite assignment of the year, so far. It was simple, yet the meaning behind the assignment was a whole other world. It was an assignment where I could truly let my creativity flow, while following the path of my blog. Creating a fake poster taught me a lot, and the most important thing I learned was to break out of my comfort zone and share something physical with the world (which, in case you’re wondering, this is my first time posting up a flyer or something of the like). It gave me a chance to share something I made, something I’m proud of, and I love that. The poster was mine, the words were mine. Now, no one probably cared to stop and read my flyer, but it was great knowing that I went out and posted it, regardless of the attention it received. And that’s what I learned the most: it’s wonderful knowing that a piece of me is being shared with you.

I’m truly blessed to have students like this, not just their production, but their reflection. Whatever I share with you on this blog isn’t possible without students willing to climb down into the pit of “dear god I have to make something” and instead of going through the motions, they work, reflect, revise, and then stand back and share their artistic adventure with their classmates and the world. It’s risky, and I’m hella proud of them. They make me feel like I’m nine again, playing in an adventure playground.