Have you ever dressed up as Elvis to be the grand marshal in a homecoming parade and thrown out buckets of fried chicken to the crowds lining the streets?

Ever won a teacher of the year award only to follow it up with winning an award from the LA City Mayor for being one of LA’s most inspirational teachers? Ever taken off your shirt in a crowded gym?

You ever broke your students’ hearts and left them with nothing but memories?

Mayfair High School in Lakewood, California will always hold a special place in my heart. I spent my first four years of teaching there and it showed me what really matters in teaching- making a difference in someone’s life now… not later.

Mayfair was an interesting mix of suburban kids whose families have lived there since the housing tracts popped up in the 50s and students from the nearby communities of Bellflower, Compton, Norwalk, Paramount, Lynwood etc… the students from the nearby communities weren’t bused in by anyone in particular- they bused themselves in by city bus of their parents dropped them off. They wanted to be there and it showed in spirit and effort. 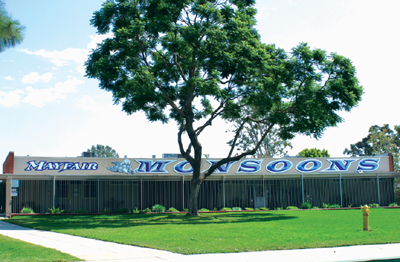 In my four short years there we won multiple CIF titles in football, basketball, soccer and you could really feel a sense of pride in the community. So why did I leave? Well it was complicated but necessary. It was really hard to tell my students I was leaving, but one student turned the table on me and broke my heart pro style– with literature.

Angie Lim was a born pistol.

I’m pretty sure she started the SAMT club (Students Against Mr. Theriault)- they had buttons, stickers, and I think I saw a t-shirt or two. You never knew where you stood in her eyes. Nothing like her older sister Janice who was always silly and never tweaked my nose.

Janice is in the middle of two of my favorite students

So it’s the last week of school and I’m saying my goodbyes and she walks up and hands me a card. In the card she basically tells me that she is going to transfer schools and follow me to Fountain Valley High School. To illustrate her point she photocopied and pasted this page from the novel A Catcher in the Rye. She underlined words for effect. It worked.

I cried. Of course I cried- and yet I still walked off that campus at the end of the year, but it reminded me about my most important responsibility with my students. So much of education is about preparing kids for the future, that some of us forget that they are kids- fragile human beings, who need and deserve memorable moments NOW not later.

Like most veteran teachers I have lost students to death’s final embrace: gang violence, suicide, drugs, sickness- death doesn’t always wait until later in life to tap you on the back. I’ve prayed silently and deeply while performing CPR on a student in class- that he would get the chance to live one more moment, that his friends, family, and the school could say hi to him one more time. We can’t wait until we get back test results, report cards, or college acceptance letters to say that our students were successful. Teaching is about moments, about honoring their present lives now, about compassion, community, and love.

For Jonathan, Julia, Zach, Scotty, Jeff and more teach as if there is no tomorrow.

I just saw this on the internet today. A former student runs a blog that I didn’t know about. In it she thanks some of her former teachers. She wrote this about me

“Mr. Theriault – My junior year of high school, I took AP English. I’d heard things bout Mr. Theriault. I’d heard he was mean. He wasn’t mean, he was blunt. He wanted us all to succeed. And he was a bit off the wall. He had an odd sense of humor. And I remember that he always wore a long sleeve shirt. Once the AP exams were over, we had a few weeks left of school.  Mr. Theriault discovered that a girl in our class had never seen Star Wars, after gasping in horror, he brought in the movie for us to watch.”

I really like showing short clips of films to help students understand certain concepts or two create what I call “Memorable Moments.” Here are a few clips that I found last year that I enjoyed sharing with students

When I watch Caine’s Arcade I think: 1. How do we create opportunities to make something like this in class, both the arcade itself and the flash-mob response? 2. I love when the film-maker says “He’s a genius.” What are you doing in class to allow students a chance to show that they are “a genius?”

Make sure the students stay quiet during the credits. His final line always hits me right in the center of my heart.

When I watch the video above  I think about the lip-service we give higher education in America. When was the last time you saw American families taking the streets to protest the insane cost of college in America.

I’m also including this TED Talk below. It’s my favorite TED talk for these reasons

Important note about the audio of the TED Talk above. Sometimes the last 4+ min of audio won’t work. If you click here you can read the transcript of the missing audience to your class as they watch him.

I’d watch it full screen on YouTube if I were you.

Last but not least. I do a “life lesson” on local places to go with friends and dates- cheap or free places that show the benefit of being adventurous and thinking outside the box. One of my students, Johnny, decided to create a series of these films for our school’s BBN- Baron Broadcast News- he is the young man featured in the video.