Let’s face it. If you have just one arm pretty much anything you do is going to stick in people’s head. Some may even call you heroic for doing things that aren’t expected of you. But to be a true hero, a great hero, you’re going to need a magnificent villain. Like this guy. 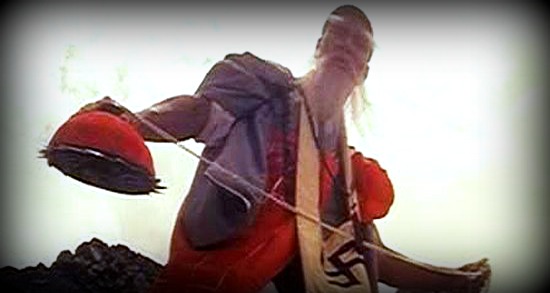 In 1976 Jimmy Wang Yu wrote, directed and acted in one of the most famous and influential martial arts films of all time Master of the Flying Guillotine. Now you would think that the writer/actor/director would name the film after his character, but no- Jimmy Wang Yu understood that greatness starts with the recognition of what you will stand against: the greater the foe, the greater the hero. The first fifteen minutes of the movie is entirely focused on a blind assassin who kills dissidents and rebels for the Ming dynasty.  The assassin, Fung Sheng Wu Chi, kills people with the most fearsome weapon in the world, the flying guillotine, which flies through the air, covers your head and then cuts it off.

So what’s the equivalent in the world of education? What’s the enemy that puts fear into everyone’s heart. What makes teachers groan and run away?

Come on Theriault, that’s just crazy talk- teachers love teaching and learning, so professional development days must be the highlight of their year. Well if that’s the case why are there teachers who:

Trust me. It’s the worst or it CAN be the worst.

Now environment, motivation,  and situation are everything when you define something as evil or villainous. I’ll give you a few reasons why teachers hate professional development.

Well he looks a bit more like this guy 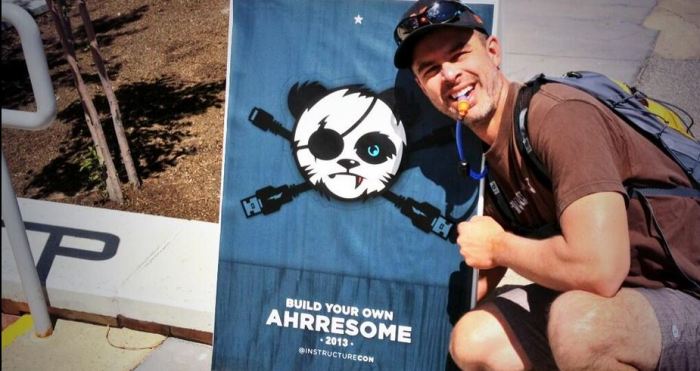 But you get the idea

STRATEGY ONE: Identify Theme and Audience

“If you have patience and endurance you can be just as good as me.” … the one-armed boxer to his students

The one-armed boxer runs a martial arts school. His lesson, all the time, that he wants his students to learn is to work hard, prepare for anything, and then you can accomplish great things. Our district has hosted techfests before, but this time there was a theme that was plastered everywhere.

FANNING THE FLAME: the logo and theme were plastered everywhere. There were large posters outside the building, overlays on all the podiums, and it was even on our name badges. Chris was able to do this due to a commitment from our district and the generosity of sponsors. Chris was relentless in getting business partners to help out- we will talk more about this later in the post.

The techfest wasn’t just open to anyone. It was specifically targeted towards the staff members in our district who push the envelope, expressed interest, and were willing to take their knowledge and bring it back to their school. This idea was highlighted when our superintendent Dr. Plutko got up to talk about pioneers and campers.

The idea really stuck. When you created a theme or motto for your event and tie your keynotes and sessions into this theme you create an experience that is easy to conceptualize and share with others.

When you identify a specific audience you give your presenters the gift of having focus. Professional development that is geared to a general audience will generally fail. We don’t teach Algebra or Calculus to everyone, so why are we having general sessions that are sure to bore some and confuse others. That is why it’s important to split up your staff and teach to their specific needs.

Who is Doug Thomas? Doctor Douglas Thomas is Associate Professor in the Annenberg School for Communication at the University of Southern California. He is founding editor of Games & Culture: A Journal of Interactive Media. That’s right a local high school district had a keynote by someone outside of the district and that will take us into the second crucial strategy for killing boring professional development.

STRATEGY TWO: The tournament: You need choice and experts who are passionate about their craft

“There is no territorial restrictions on who can enter the tournament” -Wu Cheng Sheng (Head of Eagle Claw school which is running the tournament.)

When Jimmy Wang Yu created the concept of the movie he wanted to pack as much action and diversity into the movie as humanly possible. How the heck can you have a ton of fight scenes with as little plot as possible? That’s right… you create a fighting tournament that encourages masters from every style of martial arts. As far as I know Master of the Flying Guillotine was the first movie to employ such a novel concept. The tournament is everyone’s favorite part.

If you watch the film, just know that the judge of the event is one of my favorite characters

So did you notice the names in some of those Tweets? That’s right Chris Long had the temerity to ask Alice Keeler to drive down from northern California for the event to talk about delicious data. He invited Mike Lawrence, director of CUEinc,  all of these amazing people to participate in a district level professional development experience. But that’s not all: 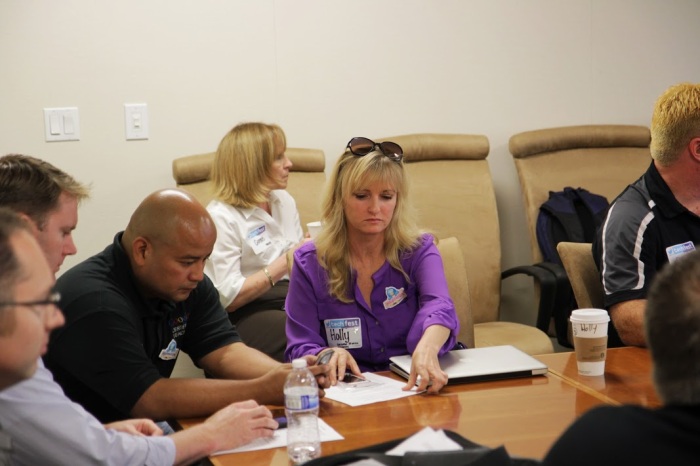 @gochemonline tweeting out the event while @HollyEdTechDiva organizes her notes

Chris invites nationally known Holly Clark to drive up from San Diego to present. He luckily had the zen master JR Ginex-Orinion already in the district to present. Then he pulls several crazy weapons out… like a ninja master.

He convinces two experts on gamification to show up via Google Hangouts (GHO) and present at the techfest. Both Rory Newcomb (an IB Bio teacher who teaches in India and tweets @roryaileen ) and Michael Matera (a world history teacher from Milwaukee, WI who tweets @mrmatera ) 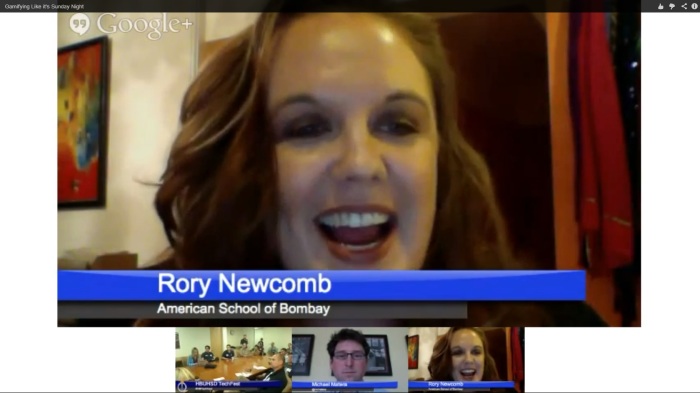 Guess who had the misfortune of presenting at the same time… that’s right me:

Luckily, people were being extremely nice to me on Twitter about my presentation on student blogs: The Best Audience is Not You

See that? People tweeting about DIFFERENT sessions at the same time at the same place Ohhhhhh…..

Chris Long managed to convince Brad Ovenell-Carter (or as his 2600+ Twitter followers know him: @Braddo) to show up for a GHO (live Google Hangout) that had a Keynote feel, with tons of ideas being thrown out on Twitter by those in attendance. 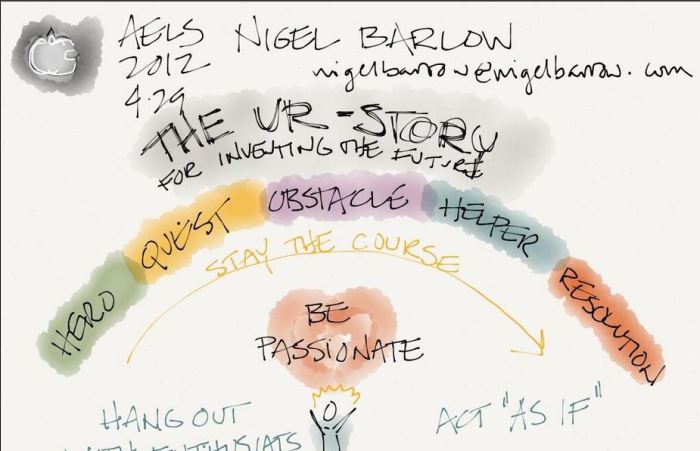 PS- Brad is from Canada. That makes him extra rad. I could spend hours just learning from his Twitter picture feed.

See that folks… that’s called choice. And there were other presentations going on as well at the same time. This was something you would only see at a CUE conference or ISTE and it was happening at the HBTechfest run by a local school district.

Now some of you who read my blogs are way too smart and I know what you are thinking. Hey David, if this is such a cool event where are the students? Oh Chris Long aka the one-armed boxer had that covered.

BOO-YA “Cat” talking about blogging in my class and in @MrZiebarth’s class. And there were other students from other schools who presented.

STRATEGY THREE: You need attention to detail- you must be completely prepared because it shows how much you care about the process and your audience and it builds an environment that supports success.

The one-armed boxer takes down each of his opponents by paying attention and over-preparing. He does not rely upon his skill and personality alone and most importantly he gets help.

In this scene the one-armed boxer and his students constructed a house with a metal floor. Then set a fire under the floor to defeat the bare foot Thai kickboxer

Our hero, Chris Long, left NOTHING to chance. Everything was considered, debated, discussed and then acted upon. If there was something Chris COULD do, he DID IT. He even did several GHOs way too late at night to discuss his ideas with others. Let me show you just a few examples: 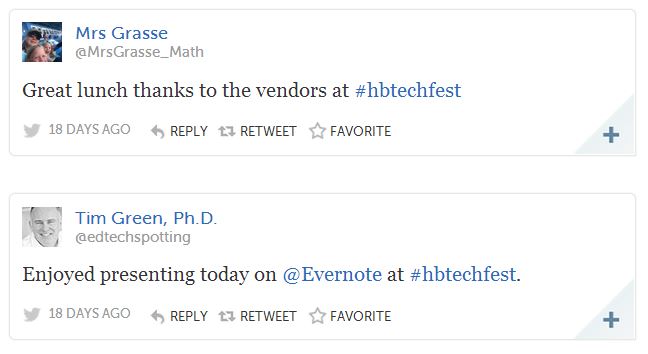 Yes- that’s correct- Chris had vendors, in the hallway outside the HBtechfest, who sponsored a great lunch for everyone so we wouldn’t miss any time and could spend more time socializing and not trying to find somewhere to eat.

Chris had a GIANT table of raffle prizes to give away at the end. I wish I had a picture of it. There were TWO Apple TVs and much more. When he gave away books he gave away TWO so that you could share a book with another teacher. Alice Keeler thought this was #genius. 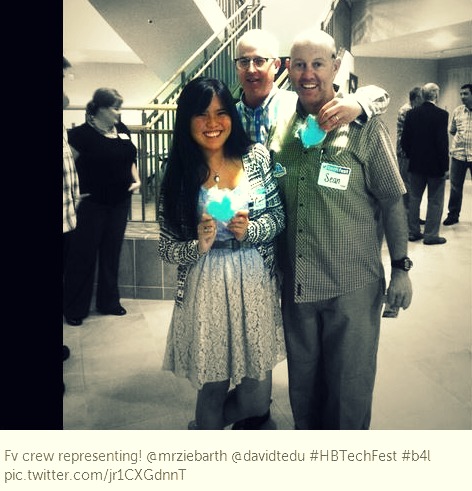 And let me show off my favorite HBTechfest swag that I got to keep. 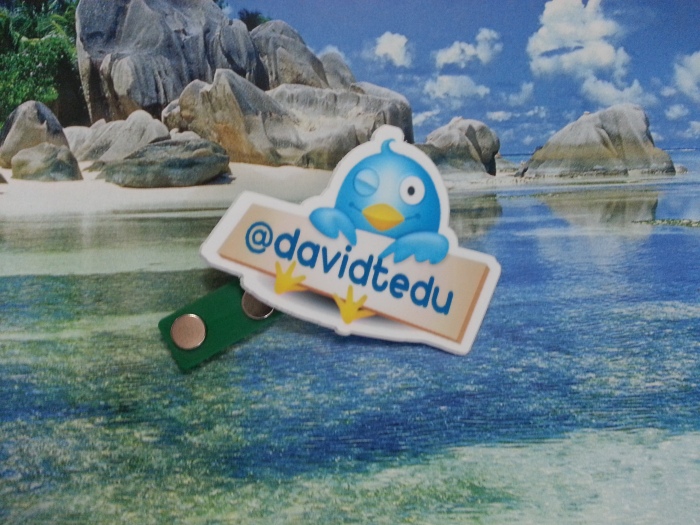 That’s right it’s a name badge with my Twitter handle that attaches to my clothes via really strong magnets. No more holes in my clothes!

Can you hear that noise folks? It’s pretty loud. That’s right it’s the sound of Chris Long RAISING THE BAR for all future school and district professional development. It’s music to my ears.

ONE LAST LINK (Well there’s never a last link in my Long Read blog Posts) If you want to see my FAVORITE TWEETS from the HBTechfest I used Storify to edit the Tweets down to a much smaller amount. You can really get the feel for the event from these tweets.

Speaking of Music- if you are into alternative music, specifically the grandfathers of electronica Kraftwerk. “According to The Observer, “no other band since the Beatles has given so much to pop culture” and a wide range of artists have been influenced by their music and image.”  Well two of the musicians from Kraftwerk split off and formed the band Neu! and their music was featured heavily in the movie The Master of the Flying Guillotine. You can hear the bad guy’s theme and the opening credits in this awesome YouTube clip

Lastly I would also like to thank Dr. Plutko and the district for hiring Director Gittisriboongul. Director “G” (that’s a cool spy sounding name) was a former teacher who has truly transformed the Educational technology vision and process and he has only been with us for one year. It was essential that they hire someone who has spent meaningful time in the classroom as a teacher and that’s just what the district did. He was instrumental in getting Chris Long to expand his reach and influence in helping others on a much larger scale at the district level and beyond.

IF YOU WANT TO LEARN MORE ABOUT THE HBTECHFEST then click to find out more.