Everyone knows there’s the J.L.A. (Justice League of America), and lately you’ve probably heard of S.H.I.E.L.D. (Strategic Homeland Intervention, Enforcement and Logistics Division), but the most important superhero organization that you can belong to is a P.L.N. or Personal Learning Network. A PLN can be the difference between having super sight and losing your sight.

No one would willing give up an eyeball. If you saw someone else getting an eye taken, you would try and save them, if you could. Yet in the movie The Avengers Loki, the Nordic god of mayhem, violently steals a scientist’s eye so he can bypass an iris recognition lock. 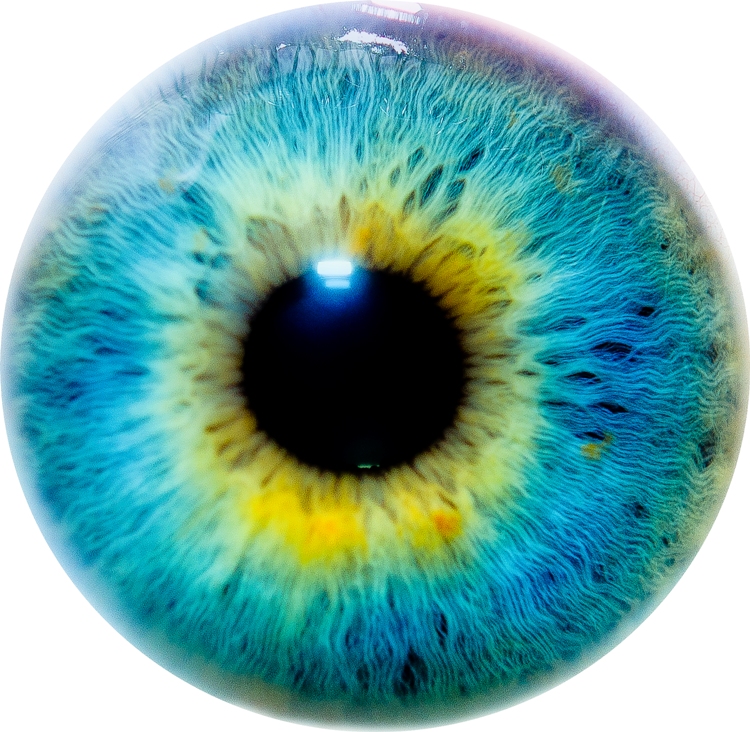 The dirty secret of superhero movies and stories is that while heroes save many, they can’t save them all. It’s a Sisyphean job to save everyone. In order to even TRY and save everyone you need more than a hero you need a superhero TEAM.

At the end of the movie Iron Man, the director of S.H.I.E.L.D. (Nick Fury) approached Tony Stark (Iron Man) and lets him know the truth of his commitment to helping the world: 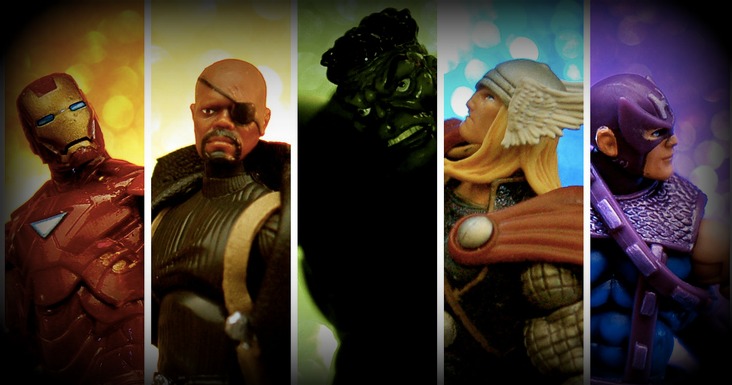 Nick Fury: “You think you’re the only superhero in the world? Mr. Stark, you’ve become part of a bigger universe. You just don’t know it yet. 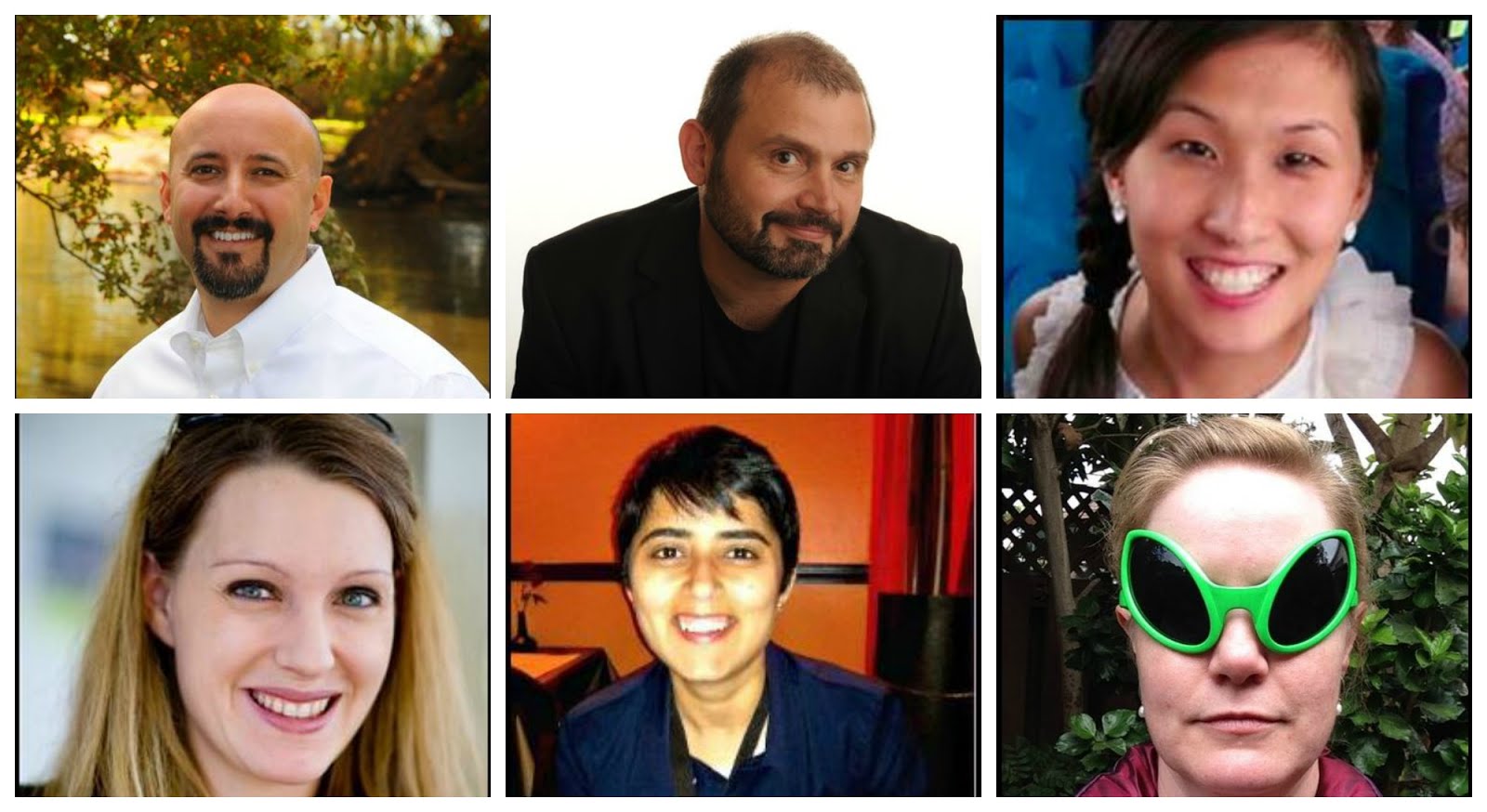 Oh wait, that’s not The Avengers, that’s just a collection of some of the bigger names in education that make up my Personal Learning Network. See that’s the beauty of a PLN, you aren’t alone or limited by geography to finding help and resources. By joining Twitter (trust me that’s the quickest way to build a superhero team) and taking two simple steps you will soon have a super hero team of your own.

This was a Twitter exchange between myself and Jen Roberts (an eduSuperHero) about two weeks into my foray into the online world of Twitter. 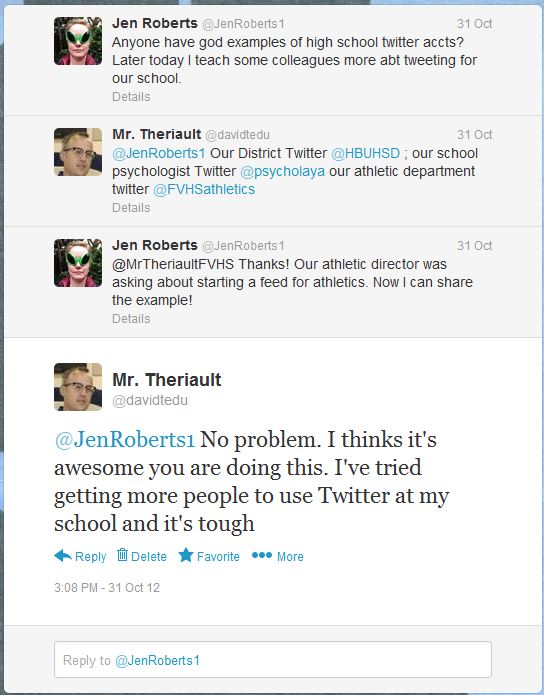 Soon after that exchange Jen started following me and now we regularly help each other online.

Even if you don’t have a ton to offer at first, teachers LOVE helping people; so if you ask nicely they will gladly help you learn how to become a more experienced user of the PLN building tools. Here was my exchange with Meenoo Rami (who runs the every popular #engchat) before my first Twitter chat. 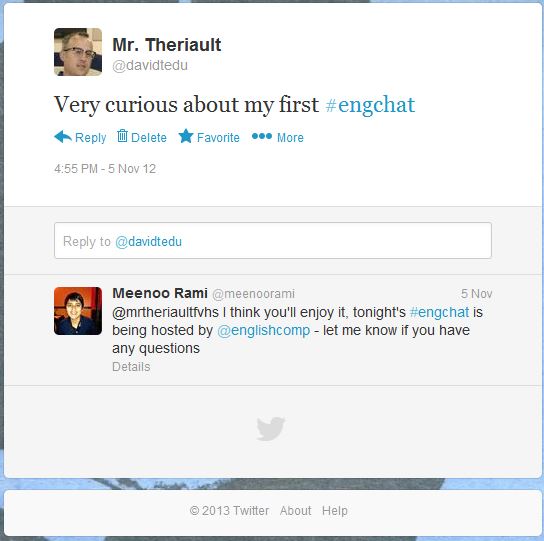 But you have to INTERACT. Your PLN will only be as strong as your commitment to finding and using the resources that other teachers are willing to share with you.

Step TWO: Public Action- Heroes DO things. Your PLN is not just a place to collect ideas- it’s a place to get ideas and then IMPLEMENT them. If you are having a hard time trying something new, then your PLN is there to push you into action.

Nick Fury: They needed a push in the right direction.

Superheros don’t fight evil in secret, yeah I know Batman works in dark alleys, but he wants people to know about his results so that others will adjust their lifestyle choices. As educators we need to SHARE our actions publicly so that others can be inspired or learn from us. Showing the world what we are doing in class can have a far greater impact than just with our fellow educators.

By embracing a PLN you turn publicly shared failures into learning opportunities. You give other people in your PLN a chance to share with you their own failures (thereby building community) and you give them the opportunity to teach you other strategies in order to achieve the desired effect.

Nick Fury: Well, I’m here to tell you, you haven’t tried them all.

IMPORTANT NOTE: There is a quote from the movie Se7en that is one of my guiding sayings . At the end of the movie (which does NOT have a happy ending) one of the main characters says “Ernest Hemingway once wrote ‘The world is a fine place and worth fighting for’. I agree with the second part.” As teachers our job is NEVER done. We never have a final victory, there are too many students, too many variables, too many outside forces and yet we continue to fight and teach regardless of a possible defeat. Just like the Nordic gods of old. The Nordic gods are my favorite gods because unlike the Greek and Roman gods, they could die. The Nordic gods, including Odin their father and leader, know they will die in the final battle Ragnarok yet “they do not yield, they die resisting.” Odin and the other Nordic gods, including Thor, show “the power of good is shown not by triumphantly conquering evil, but by continuing to resist evil while facing certain defeat.” (quoted from Edith Hamilton’s Mythology)

Perhaps in the excitement of watching the movie The Avengers you failed to notice an interesting allusion. Have you ever really looked at Nick Fury with his eye patch and never say die attitude? 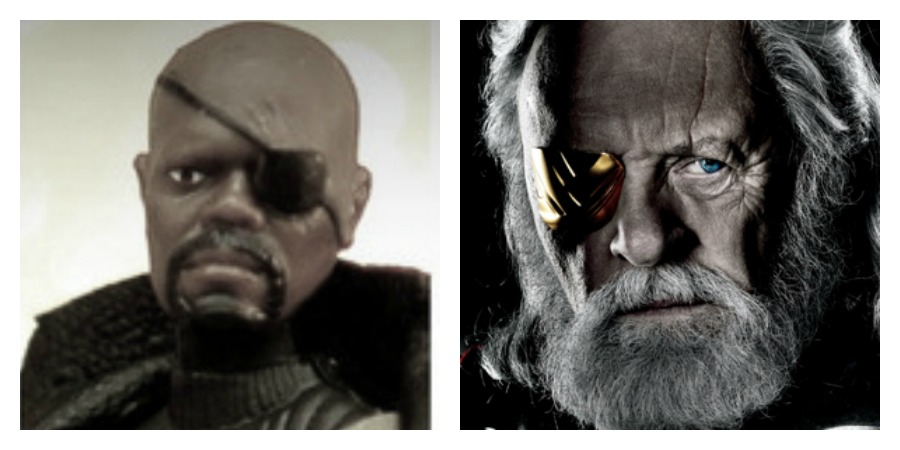 That’s right. Nick Fury, like Odin has lost an eye. Remember at the beginning of this article when I told you that “no one would willing give up his eyeball.” Well… there is one person: Odin. Odin traded his eye with Mimir the Wise so that Odin could drink from the Well of Wisdom. (Hamilton’s Mythology) I bring this up because there is a trade off for gaining the wisdom of a PLN. You have to adjust priorities a bit, I stopped watching most TV. You have to put in some time to really benefit from your PLN, but it’s worth it: trust me. I’ve gained more knowledge on Twitter in less than a year than I did in my teaching credential program, my Masters Degree program and my twenty years of staff development put together. So I’m going to let Nick Fury ask YOU, a potential superhero of education, the most important of questions:

This blog post was originally written for the CUE blog, I encourage you to check out the other great blog posts on their site.