A monstrous  dog, a beautiful lifeguard, a group of villains: the best quests in the world rely on near-impossible goals, memorable adversaries, and some friends to share the story with afterward. In teaching the elusive quest is trying to achieve 100% engagement. It’s easy to deliver content. Heck it’s easy to deliver good content, but getting every student engaged with the content is another matter entirely.

In the past I’ve shared with you the mistakes that teachers and administrators make when they struggle with the concept of engagement and I’ve also pointed out that even the best teachers in the world won’t guarantee 100% student engagement. So it must be impossible right. I mean let’s just give up right now, deliver the content, look forward to lunch and our one month of summer vacation as we jog into retirement… right?

It’s going to hurt my cred as a true geek and sports fan, but I really love the movie The Sandlot. If you’ve never seen the movie, here’s a quick trailer to get you up to speed.

Basically a young nerdy boy with ZERO athletic ability falls into a group of street-smart baseball players and ends up giving them a memorable experience when they lose a baseball to a massive dog who lives behind the outfield fence. 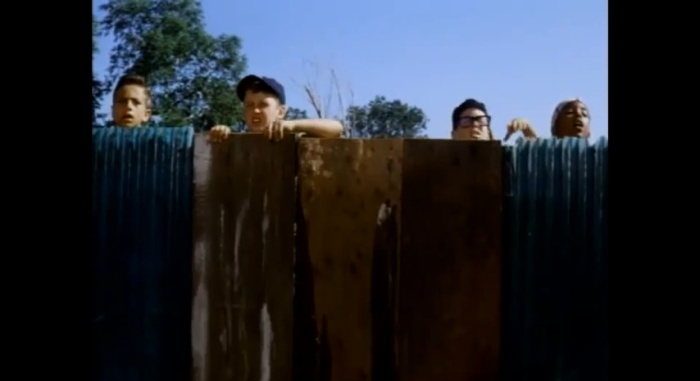 The most memorable scene BY FAR is when one of the characters, Squints, a waifish boy wearing too large glasses “drowns” in the pool and must be rescued by a female lifeguard that all the boys have a crush on. She is way beyond their league and they know it, but Squints has a secret strategy and he WILL accomplish his quest.

Every year I have my students write round-robin narratives. They get in a group of three or four: each with their own paper. Each student starts their own story and then after about 7-10 minutes they switch papers and continue the story. The person who started the story gets to finish the story on the last turn. It’s pretty fun. Once each student gets a chance to read another student’s story you can see the wheels turning in their head as they think up new situations and plot twists. Last year I decided to raise the stakes. I put a different color piece of paper on everyone’s desk. After I told them the original task requirements I had each of them turn the paper over and read their new “special” task. They were NOT to share their unique task with anyone else. Here are the task sheets- I had four each a different color, each named Task A; Task B; Task C; Task D:

Did you see it? That’s right- every students had the exact SAME task, but they didn’t know that. The secret took engagement to new heights. Students struggled with the prisoner’s dilemma element of the task. Just as Squints secret strategy made him 100% engaged this writing task dialed my student in. I could see it in the smoke coming out of their ears, their secret grins (just a twinkle in the eye) and the furious scribble of pen on paper.

Secrets are fun. We loved secrets as kids. Whether it was playing “Telephone” or “Hide and Seek” we not only enjoyed keeping a secret we LOVED the big reveal. The reveal made the experience memorable and making learning memorable is not only cool, it’s imperative.

CCSS.ELA-Literacy.CCRA.R.2 Determine central ideas or themes of a text and analyze their development; summarize the key supporting details and ideas.

CCSS.ELA-Literacy.CCRA.R.3 Analyze how and why individuals, events, or ideas develop and interact over the course of a text.

The scene I love the most in The Sandlot reminds me of my own childhood. We were crazy as kids. I remember making two story backyard forts with a basement and rain gutters. We were constantly scrambling up half-cooked schemes. In The Sandlot the best scene involves a problem, a plan, and a team. Smalls, the un-athletic “nerd,” loses his father’s baseball, signed by Babe Ruth, over a wall guarded by a monstrous dog.

A dog that evokes Cerberus himself guarding the Gates of Hell.

The boys devise several inane plans that rely on everyone pitching in.

They build contraptions, pulleys, and even one device that relies on several vacuum cleaners linked together 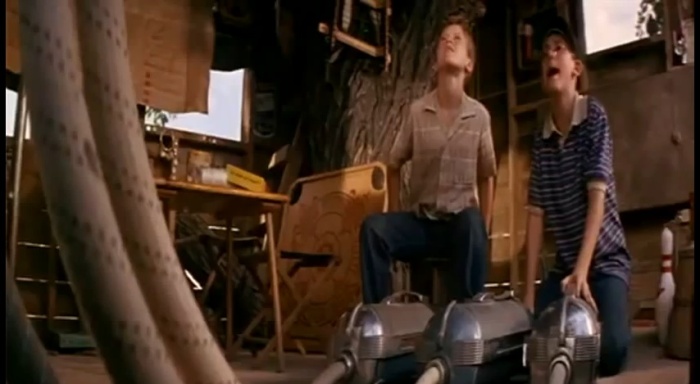 that eventually overheats and blows up.

But even in failure the boys have a blast.

Every year I create a character map for novels and plays where the sheer number of characters overwhelms my students. A novel like The Count of Monte Cristo which has something like 4,000 characters. So I put a character map on the board that they can look at whenever they are confused.

It’s helpful and nice, but it’s not very engaging. Luckily I had an epiphany. Why am I creating the character map? Why don’t they? In fact why doesn’t the whole class do it together? I assigned one, or more,  characters to each student. They had to know everything about those characters: who they were related to, who they killed, who they were killed by, who they betrayed, helped etc… I also had some students work as the organizers of this team activity.

That’s right each class was a team competing against the other classes for best character map. They could use color coded legends, colored lines, symbols etc… to visually show important facts and relationships. It was awesome and engaging to say the least. 100% of my students were out of their seats and working on where they should put their characters in the map.

Click on pic to see it in all it’s majesty.

One class went so far as to create a CSI style “solve the murder” board with white yarn connecting the characters. They even stayed in at lunch to complete their task.

Once again click on pics to see larger images

The competition really brought out their A game and required the whole class to pitch in.

CCSS.ELA-Literacy.W.9-10.6 Use technology, including the Internet, to produce, publish, and update individual or shared writing products, taking advantage of technology’s capacity to link to other information and to display information flexibly and dynamically.
CCSS.ELA-Literacy.W.9-10.10 Write routinely over extended time frames (time for research, reflection, and revision) and shorter time frames (a single sitting or a day or two) for a range of tasks, purposes, and audiences.
CCSS.ELA-Literacy.RL.9-10.1 Cite strong and thorough textual evidence to support analysis of what the text says explicitly as well as inferences drawn from the text.

Since the boys in The Sandlot formed a team you would think that the the most important team activity was playing another team right? Especially since I mentioned “villains” in the opening paragraph (you did remember that right?) Well the team vs. team scene in The Sandlot is really just a throwaway scene so the boys can trade insults with their adversaries.

The real villain is boredom. The bane of all young boys and girls. The answer to boredom in The Sandlot is a game called Pickle. Pickle is when a boy is caught between two bases putting him and the other players, on defense, into an instant game of “pickle.” Sprinting back and forth between the bases Pickle is as fast-paced as it gets. Everyone is involved: running and yelling all at once- everyone has their part and the action is non-stop. 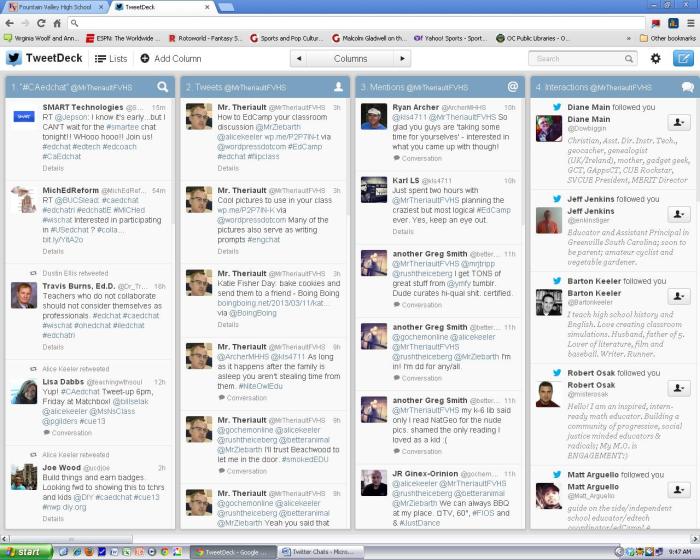 Last year I had each of my students sign up for Twitter. If they didn’t want to keep the account I didn’t care, but they needed an account with their name on it for the activity. I created a class Twitter account so I could follow my students during the activity (I didn’t want to follow them with my personal account) and I created a class hashtag just for the event. #mcristo2013 I took my students to the computer lab (wow it was actually open for the day- I think I had to sign up in December to claim a spot in May) and had them bring up the site TweetChat. I recommend having just ten students at a time login otherwise the TweetChat site thinks you are a group of hackers all joining from one central location. We actually got locked out during my 1st class doing this, so I learned the hard way.

The Twitter Chat was AWESOME. I’d throw a question out on the TweetChat board and you would hear nothing but the sound of typing… and then laughter, or other chatter- kids were calling out each other out loud while they were writing and reading. It was raucous and yet the kids were ALL answering the questions, ALL reading each others’ answers, ALL responding to other’s responses, ALL 100% engaged. And the best part? The best part was that their learning was documented and easily shared using Storify. Take a look:

Some of my students (well one sassy and talented lady) even got a little silly. I had warned all my students about the possibility of a SPAMMER on the odd chance that we trended locally. This student decided to pretend to be a SPAMMER. I have to admit it made me laugh quite a bit when it came up.

So what’s the secret to increasing engagement? You have to THINK about it. It has to be one of your goals. You can’t just think about content, objectives and standards you have to think about how to maximize engagement for every student. Will it be 100% effective all the time? Of course not. Your students have a say in engagement. No matter what you do their own priorities will have a say in their engagement, but you CAN make a difference. If you want. In your next lesson plan answer the following:

How can I tweak this lesson to involve ALL of my students in a fun and engaging manner? aka How can I tweak my swing to go from being a doubles hitter to a home-run hitter?